This is not an original Low Carb Waffle recipe.

I didn’t come up with this brilliant idea on my own, lol. 😉 I got the recipe in a recent Keto Krate box that included Legendary Foods Pecan Pie Almond Butter and I wanted to share it with you, and show you all the fun ways I’ve been experimenting with it… That’s one of the features I love most about that box specifically: the inserts they include with creative recipes for the products inside. I’m NOT creative in the kitchen, so it’s fun to experiment with new foods & recipes every month!

I’m working with both companies so I have discount codes for you for both, which also means I earn commission on referrals, but this Low Carb Waffle Recipe stands on it’s own with very simple low carb ingredients you probably already have. 🙂

I never even considered cooking or baking with nut butters!

What a brilliant idea… 🙂

The Legendary Foods Pecan Pie Almond Butter is so delicious you could literally eat it straight out of the jar off a spoon (and I have! lol), but the recipe intrigued me so I decided to try it out… after several other low carb waffle FAILS over the years. 😛

I have NEVER had a low carb waffle come out so thick, fluffy and PERFECT before! My attempts always ended up in a mess I had to scrape out of the waffle maker, lol.

These low carb waffles though, are beautiful! The recipe is consistent and foolproof, so they come out perfect every single time… Let’s get on with the recipe already… you’re going to love this one!!

The cinnamon and vanilla are optional, and I used half the sweetener it called for, but feel free to experiment to suit your taste preference.

I use and prefer Sweet Like Sugar as the sweetener, but also tried Swerve and the recipe came out the same with both.

You can use ANY kind of nut butter in this recipe. I’ve experimented with several myself. But the Legendary Foods flavored nut butters were definitely the best!

If you use a plain nut butter, you might want to add blueberries and/or chopped nuts to give them more flavor. Stir together the first three ingredients until smooth. Add the other ingredients. Mix well. Grease your waffle iron and add about 1/3 – 1/2 cup of batter. Cook until deep golden brown. Repeat. Serve with additional Pecan Pie Almond Butter, toasted pecans, butter, and/or sugar free syrup. (Makes 3-4 waffles depending on the size of your waffle iron.)

^ Those were the original directions on the recipe card.

I have a small 2-plate waffle maker, and I used less batter per waffle (1/4 – 1/3). Doubling this recipe, I got TEN full waffles and they came to only 2.5 net carbs each.

If you don’t have a waffle maker, or you just want pancakes instead, you can use this recipe to make pancakes too. I’ve tried it, and they turn out just as fluffy & delicious as the waffles. 😉

You’ll just want to use the MyFitnessPal Recipe Calculator and put in all of the ingredients you use, based on your own labels, and put in the number of servings (number of waffles or pancakes you make) so you can log them accurately.

Using the exact same recipe, this time with the Blueberry Cinnamon Bun Nut Butter and adding frozen diced blueberries, made the BEST blueberry waffles I’ve ever had in my life! 🙂 It’s almost hard to believe these are low carb, gluten free and HEALTHY. 🙂

I mentioned above that I doubled the recipe, which you can see in the photo which has EIGHT eggs. 🙂 With pancakes I would just make a single batch, unless you’re serving more than two people. But the waffles are GREAT leftover, and can be popped in the toaster and enjoyed later – so it’s great for “meal prep” to enjoy several mornings in a row, or to take with you on the go. In case you were counting them…

That stack is missing two waffles – because they were on MY PLATE! 🙂 It never (EVER) occurred to me that you could cook or bake with nut butters!

I also had no idea there were such delicious low carb almond butters out there – until I discovered Legendary Foods. It’s good on celery, on crisp cucumber slices, on a spoon, licked off your finger 🙂 or used to make pancakes or waffles (or even muffins!) using the simple recipe above. They all make great waffles, pancakes & muffins but my top 3 favorites are:

(Our coupon code is: LOWCARBTRAVELER )

I could eat all 3 of those straight out of the jar!

Since I have them I’ve been using them in this recipe, or to make fat bombs – but I wouldn’t go out of my way to reorder those two flavors.

If I had to pick a FAVORITE of the three above, it would be a TOUGH call. They are all three delicious with a great flavor and texture, and all three very low carb.

Blueberry & Apple are both 2 net carbs per TBSP (or 4 net carbs per serving), while the Pecan Pie Almond Butter is half that: 1 net carb per TBSP. It all depends on what flavor you’re in the mood for. 😉

I’ve made about half a dozen batches of this recipe so far with various flavors and in various ways (pancakes, muffins, waffles) and every single batch has turned out GREAT! The Blueberry Cinnamon Bun Nut Butter is a personal favorite, especially since they changed it from Cashew Butter to Almond Butter which drastically lowered the carb count (now just 2 net carbs per TBSP). There are so many other ways to use these FUN flavored nut butters, so if you have some – or you’re ordering some today – stay tuned for more creative recipe ideas.

I’m having so much fun with these nut butters and can’t wait to share more of those delicious ideas with you!

In the meantime… weekends are made for waffles!

p.s. In addition to the fabulous flavored nut butters, Legendary Foods has AMAZING seasoned almonds and Wasabi Macadamia Nuts too. 😉 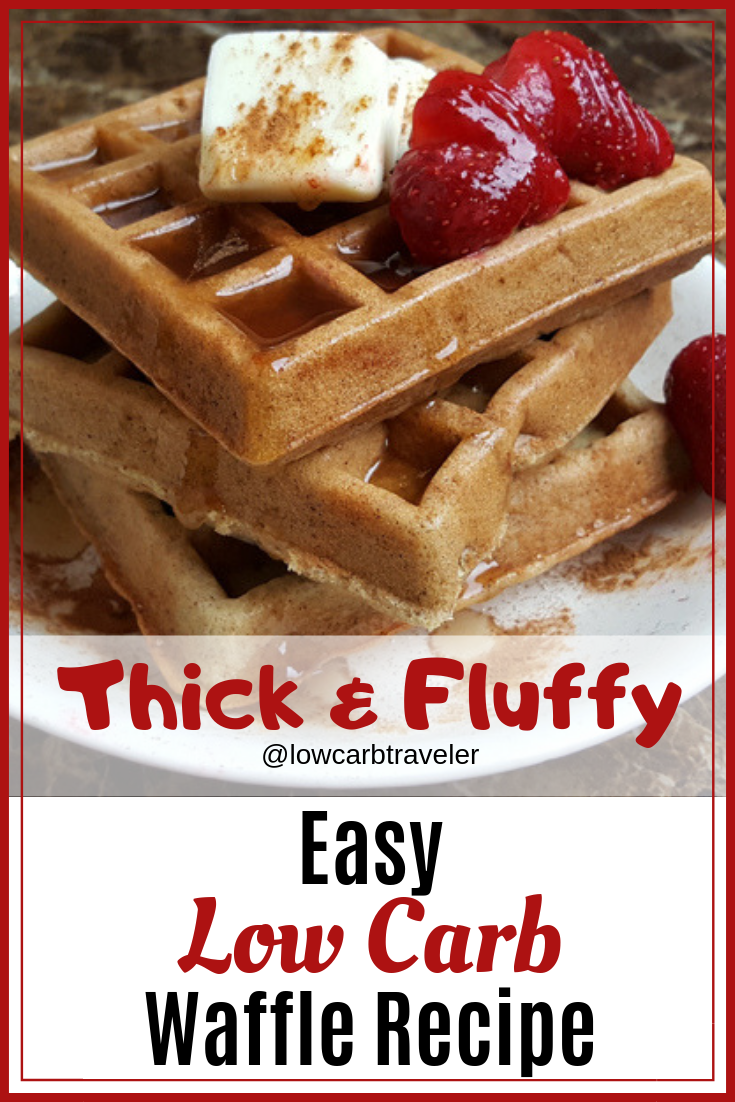