If you’re participating in the year-end Winter Low Carb Challenge here is this week’s weigh-in thread in the group. You can weigh in there, or leave a comment here on this post with your total number of pounds lost since we started on October 29th.

I look forward to hearing your results so far! 🙂

For the last 4 days I have done ZERO cooking, outside of my usual cheesy eggs.

While this may seem like an odd “food diary” or example to you, there’s a purpose behind it. 😉

The first reason I haven’t done any cooking this week is because I have been nonstop-whirlwind-busy!

But even without cooking at all, other than whipping up eggs real quick, I have managed to stick to super simple keto-approved foods and meals for four straight days.

That’s because I’m doing a “clean testing series” on a variety of “keto foods” or foods that people are unsure are TRULY keto-friendly or not.

In order to do that I had to get my body back in ketosis and my blood ketone and glucose levels stabilized after the tricky Domino’s wings threw me out of ketosis. 😛

I like for my ketone levels to be SOLID for at least 72 hours before another test, and then I eat super clean (already ketone-tested foods ONLY) for another 72 hours after testing a food – so we get “clean” (untainted) results.

I have a whole list of foods I can’t wait to test! From a Bunless Bic Mac to a couple of products in the November Keto Krate that people are questioning.

Stay tuned for the results! 😉

In the meantime, here’s what I’ve been eating for the last four days – and more importantly: my last four MyFitnessPal food logs, so you can see how I log my meals and how easily the keto macros work out…

We’ll start back at Sunday, the first full day I was back in ketosis after those dirty wings! lol… I chose to go for a decent hike that day and do some challenging climbs too, as exercise also improves your ketone production.

I took my first day off in quite awhile, but I still had stuff to take care of real quick before I could get out & off the grid for the day, so I had some packaged keto cookies for breakfast real quick with my coffee while I wrapped things up.

Then on my way out of town I stopped at Burger King and ordered “2 double cheeseburgers plain, no bun please, so just meat & cheese.”

This comes out to 2 net carbs and under $4, and while it’s not my favorite low carb fast food – it’s cheap and super low carb. 😉 I ate those plain because: “no dripping & driving” 🙂 lol.

I headed straight up the mountain for Fall Creek Falls to enjoy the SUNSHINE which finally came out for the first time in over a week!! 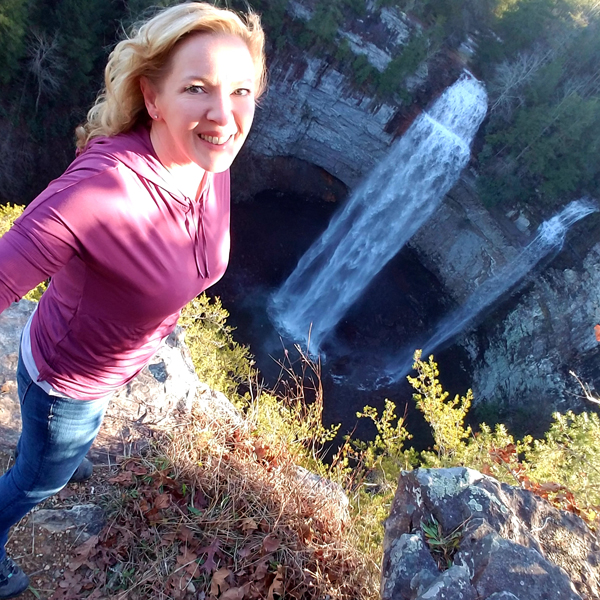 This one pictured is their Chocolate Chip cookie, but I’ve been eating these as a quick snack or to get me by long hours between meals because I’ve already tested them – they don’t spike glucose or tank ketone levels.

Quite the opposite: my ketone levels have been higher than normal lately! Our coupon code is LOWCARBTRAVELER for a discount.

I had an AMAZING hike! 🙂

I was planning to go to Applebee’s for a nice big dinner of salmon & green veggies after my hike… but I was exhausted. 😛

I ended up eating a Macadamia Coconut Fat Bomb packet in the car on the way home… and I was in bed by 8pm, lol. My hike was a GREAT workout. I decided to go to the base of Fall Creek Falls this time instead of the top…

I ended up climbing down the steep, slippery bluff to play downstream – which meant a lot of climbing over huge rocks and fallen trees, all super slick.

That required using a wide range of muscles and body weight leverage for tricky climbing, especially back up the slippery bluff over large boulders! A better workout than I’ve ever gotten at a gym!

Here’s how my MyFitnessPal diary looked and how my macros worked out for the day: How I Get Net Carbs in MyFitnessPal (It’s Free!)

Breakfast was my usual cheesy eggs! 🙂 I was running errands later in the day and picked up a quick low carb meal at McDonald’s. Actually enough for two meals. 😉

I ordered it like this: “4 sausage patties and 4 round fried eggs, please.” 🚗

That comes to 5.6 carbs according to the nutrition calculator on their website. Their cheese is 2 carbs per slice so I skip it, just FYI… They charge different for that at every location – and every time even. Sometimes it’s cheaper to order a la carte, sometimes the deals on their mobile app are cheaper.

At MY McDonald’s this week breakfast sandwiches were on special 2-for-$4. I ordered a la carte first tho: “4 sausage patties and 4 round fried eggs, please.”

If it had been more than $8, I would have said, “In that case I’ll take two of the 2 for $4 sausage egg mcmuffins, all four with no bread and no cheese, please.” 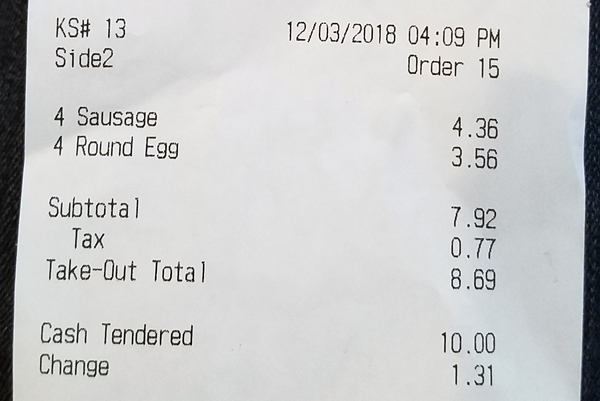 Ohhhh… and for dinner! ❤

I should mention btw that this was a 24 hour day for me. I fell asleep early Monday night so I was up at 2am on Tuesday – and up until 2am that night. Which is why there are FOUR meals. 😉

This is a bowl full of delicious: Philadelphia cream cheese with Peanut Butter Chocolate Chip Legendary Foods almond butter (I like it refrigerated) with 60 grams of pecans all topped with Macadamia Coconut nut butter. 😍 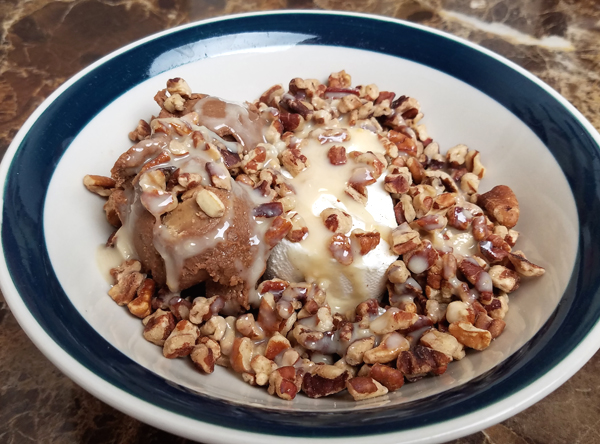 Here is my MyFitnessPal diary for Monday: 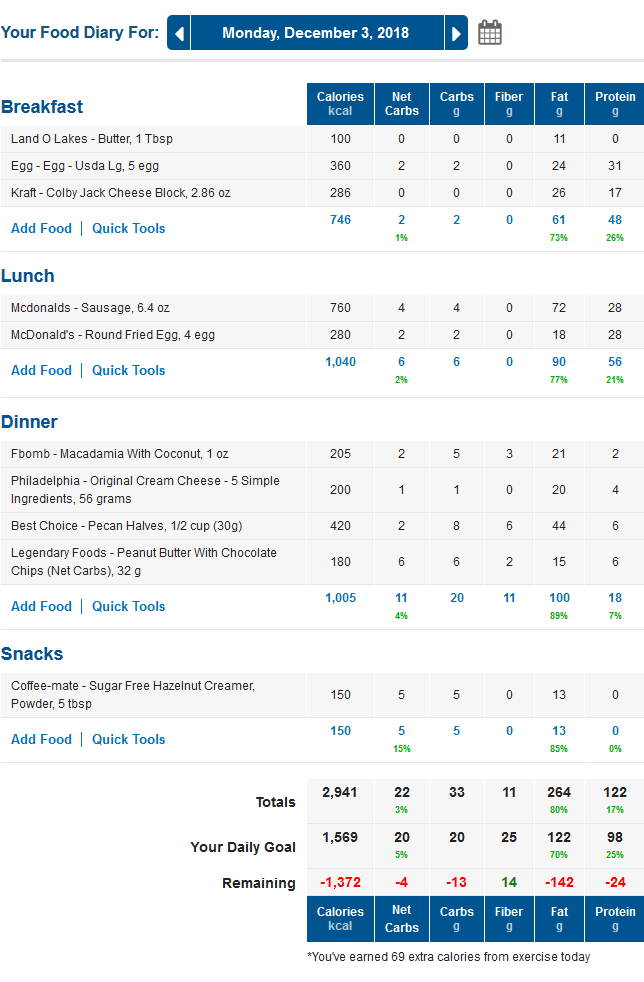 Tuesday was a MUCH shorter day…

I had my cheesy eggs again for breakfast, and that same bowl of yumminess again for dinner! I’m eating a lot of the same foods over and over because they are known/tested foods and I’m getting myself ready for another round of “keto food testing.” 😉 Here is my MyFitnessPal diary for Tuesday: 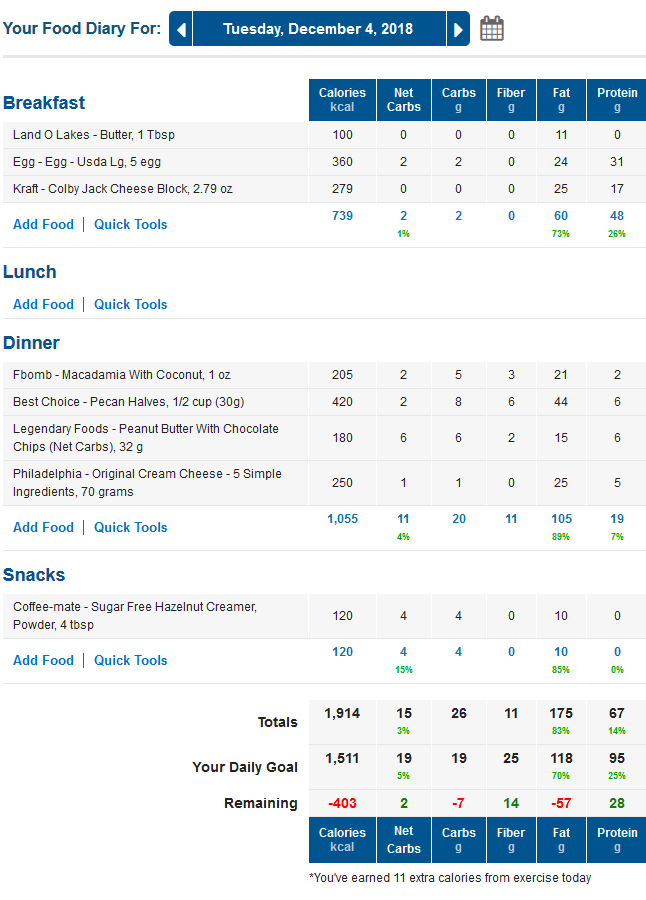 I had a quick lunch at my desk. And YES, those are EXACT measurements. 🙂

I’m a stickler for measuring & tracking! I use this kitchen scale, it’s small and convenient and accurate – and inexpensive!

I was caught at my desk at dinnertime for a virtual meeting (not video, thank goodness -lol) so I just grabbed some Peanut Butter NUI Cookies and a Fat Bomb Packet and called those dinner.

Again, because I’m sticking to ONLY known/ketone-tested foods right now in preparation for my next big food test. And both of these keto products test GREAT on blood glucose & ketone levels. 😉 Here is my MyFitnessPal diary for Wednesday: Interesting first because it was odd to see it out in December, especially in the cold spray from the nearby waterfall.

But interesting also because it has the exact markings of a harmless garter snake… but the head is shaped like a viper. A garter snake typically has a narrow head, the same size or even more narrow than it’s body. This one had a triangular shaped head like a poisonous snake, even before I startled it (lol). See this video:

I’m still stumped on that one!

Earlier this week I ran across this note I got passed last year while eating takeout during a business conference. 😊

That made for an interesting conversation! LOL… ❣ 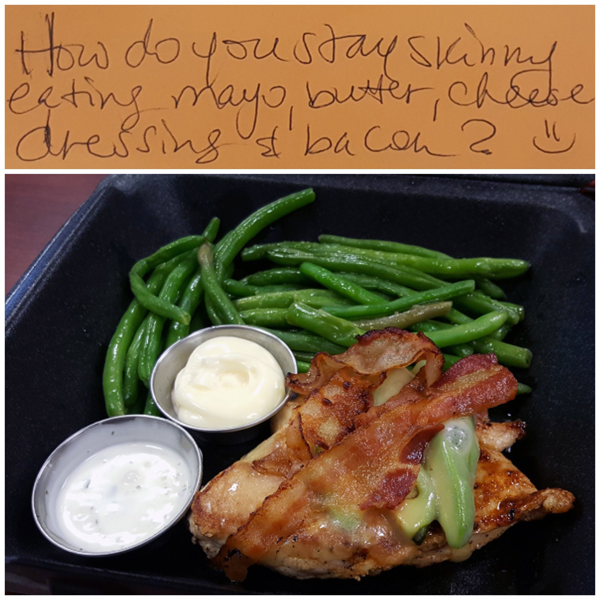 My ketone levels are solid and I’m excited to test out my next “that’s not keto!” food that people are unsure about. 😉

Stay tuned for the results! The glucose/ketone testing kit I use is by Keto Mojo, and it comes with everything in the kit. They were kind enough to set us up with a 15% discount on those. It’s coded into my affiliate link so when you use this link you’ll get 15% off automatically at checkout.

Apologies for the weird choice of foods and lack of any good “meals” or “recipes” so far this week, lol. I’m in testing mode!

I actually have several foods I want to test with my blood glucose/ketone testing meter, mainly things that get a “that’s not keto!” response – so we can ALL find out for SURE whether that’s NOT keto… or not. 😉

My hike last week was a blast. This week my exercise will be dancing! I’m off to hear one of my favorite bands in a couple of days. Then I’m going to plan another fun hike for each of the next two weeks… and end the year with more dancing!

In between I’m getting back to my home workouts. FINALLY, lol.

Don’t forget to weigh in this week!

Previous Post: « 💥 Domino’s Wings Warning and Apology 😔 BIG Keto Mistake! Here’s Proof…
Next Post: Let’s Catch Up! How Are You This Weekend? »