This has to be my favorite low carb breakfast recipe yet!

What is it, you ask? Blueberry French Toast Sticks that are keto friendly and very low carb made with super simple ingredients. 🙂 Just LOOK at this deliciousness!! Have you seen the Egg Loaf Recipe that’s making waves across the web? If you haven’t tried it yet, let me tell you: it’s worth all the talk. 😉

That’s what I used to make the beautiful blueberry french toast sticks above!

I originally heard about it from @keto.sam.iam (Samantha) on Instagram myself and shared her recipe here. Here’s the simplified version of the recipe…

If you’ve ever made “cream cheese pancakes” this is the same basic recipe, but WAY better. The original recipe is for 8 servings, but you can halve the recipe or adjust it accordingly. The ratio is 1 egg, 1 ounce of cream cheese, 1 tbsp butter. I use the Philadelphia 5 Simple Ingredients cream cheese that is 1/2 carb per ounce instead of 2 carbs per ounce, lowering the carb count on this recipe dramatically: * 8 ounce cream cheese (soften in the microwave)
* 8 tbsp butter (I also melted it some to blend easier)
* 8 Large Eggs
* Cinnamon (I didn’t measure mine, just dashed it in)
* OPTIONAL: sweetener of choice, to taste

Note: I did NOT add sweetener to mine because it’s sweet enough to me when you top it with berries & sugar free syrup – or even just the syrup. 😉

I left my cream cheese & butter out on the counter to soften while I was busy doing other things, then warmed it a little in the microwave to make it blend better.

Whisk your eggs, soften the butter & cream cheese then mix all three ingredients with a hand mixer to a liquid consistency with no chunks of cream cheese.

(to the best of your ability, I say – because mine still had little bitty small white chunks all in it, lol – and I blended the butter & cream cheese together first even)

You can either grease a baking dish liberally with butter, or use parchment paper. I had the best luck with parchment paper, after trying it both ways.

I used a baking dish slightly smaller than 9×11 I believe. I’m still experimenting with dish sizes for a full batch vs half batch, but it seems to do fine either way – it just comes out thicker or less thick.

This was my first batch, and I forgot the cinnamon so I swirled it in at the end – with a heavy hand obviously, lol. This is what it looked like BEFORE it went in the oven: I’ll walk you through the photo tour of my two batches so you know EXACTLY what to expect with this recipe – including my variation of adding blueberries and making french toast sticks out of this recipe. 🙂

After 30 minutes, I pulled mine out of the oven. It had fluffed WAY up around the edges, but then calmed down while it was cooling down – still a little uneven but not as bad as I thought it was going to be: Using the parchment paper I was able to slide it right out of the baking dish and let it cool, then cut it into eight (8) equal servings. The brands/ingredients you use, what you top it with, and the number of servings you cut it into will all determine the macros and carb count.

I use the MyFitnessPal Recipe Calculator and enter my own brands/amounts, and the number of squares or servings I cut it into.

Yes, it’s “eggy” just like cream cheese pancakes. But baking it the full amount of time (30 minutes, or until firm/done) gives it a great bread-like texture that holds together really well. Honestly, I ate that first slice straight out of the dish – plain – and it was delicious with nothing but the cinnamon in it. 🙂

But I’d seen others fry it in butter to make “french toast” in various ways, so I sealed it and put it in the refrigerator and pulled it out to make breakfast the next morning…

I cut each of the 8 squares (um, there were 7 left lol) in half which made two french toast sticks per serving of egg loaf. I liked mine thick and fluffy, but if you wanted them thinner & crisper, you could also cut them in half the other way – with a very sharp knife.

I was making breakfast for two, so I melted a full TBSP of butter over medium heat in a non stick skillet and fried all 14 “sticks” – flipping them once to brown them nicely on both sides. (It took me two meals to finish my half, lol.)

I was torn on which syrup to use, or which flavor of syrup I should say.

The ChocZero Syrups are all AMAZING and to date I prefer the Chocolate (not for this though) and the Maple Pecan – but I hadn’t tried the Vanilla yet. Our coupon code at ChocZero is: TravelingLowCarb – for a discount.

I opted for the Vanilla Syrup (which is clear) and only used a little drizzle with blueberries & raspberries.

Once that vanilla mixed with the berry juices over the buttered french toast sticks… it was an AMAZING flavor combo! I browned mine well on both sides to give it a crisp buttery outside, but they were still very soft & fluffy on the inside. I had exactly enough ingredients to make another half batch (4 eggs, 4oz cream cheese, 4 tbsp butter) so this time I decided to add diced blueberries to the recipe. 🙂

Using the exact same recipe with half the ingredients and a smaller baking dish, the only thing I added was 1/4 cup (35 grams) of blueberries.

This time I greased the glass baking dish liberally with butter. It came out of the dish okay, but it took a little finesse. Maybe because of the blueberries. But the parchment paper was definitely easier. 😉

Next I fried them in butter on each side, just like before: Note: I baked the “egg loaf” earlier, put it in the refrigerator, then fried the cold “french toast sticks” in butter. I’m not sure if that makes a difference, but it really firms up when you refrigerate it, which makes it easier to slice & handle for frying.

You want to flip them “tenderly” of course. This is not the greatest photo, but it shows you the density and texture – they hold up very well. The mixture of browned blueberries and the cinnamon made these DELICIOUS! 🙂 I chose the Vanilla ChocZero Syrup again because it was FABULOUS, especially with raspberries. That is such an amazing combo! Aaron preferred the Maple or Maple Pecan syrups, so any sugar free syrup you prefer is fine with these. This is such an EASY and VERSATILE recipe, whether you’re making the egg loaf or frying it up into french toast. And it’s a much better way to eat eggs than my usual plate of cheesy eggs -lol. WAY better! 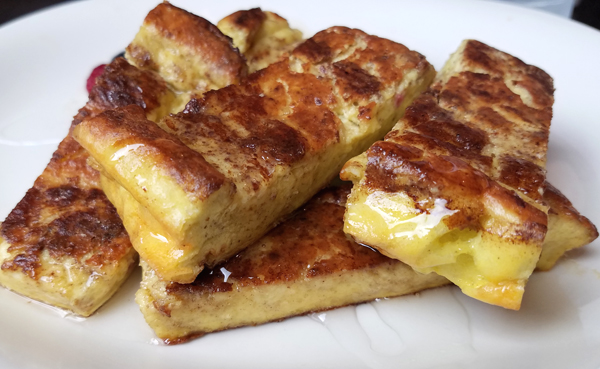 Topping it with berries is totally optional of course, and I only use 18 grams of berries myself. Berries are a great addition to a keto or low carb diet in moderation. 😉 I don’t really eat dessert much, and this is a VERY filling and high fat food, so this was my dinner today: With the butter I fried it in, the berries inside and on top, plus the syrup… my meal came to 643 calories, 6 net carbs and 85% fat.

So there you have it. A whole new (delicious) way to eat eggs… This recipe got me HOOKED on the berries & vanilla combo!

You only have to drizzle a TINY bit of the ChocZero Vanilla Syrup on your berries, and when that mixes with the juice from the berries – Mmmm. 🙂 The coupon code at ChocZero is TravelingLowCarb for our discount.

After making this recipe twice, I had to sit down and share it with you.

I’ve been seeing the “egg loaf” EVERYWHERE lately and I’m SO glad I finally decided to try it – and fry it – and add berries to it.

When you can eat THIS for 6 net carbs, you’re pretty much in keto heaven. 😉

This was perfect timing as I was pretty much sick of cheesy eggs, lol.

I hope you enjoy the recipe…

It’s very forgiving and super simple, so get creative with it!

p.s. I really hope I didn’t forget any important details. I’m not that great of a cook or “recipe maker” – but this one made me look like a rock star on Sunday morning, lol. 😉

Let me know how yours turns out!