I cooked once over the last week, and had a great keto restaurant meal too, but otherwise it’s been super simple meals & keto snacks.

Actually I cooked twice. Both times made enough for three meals. I don’t know whether to call that a curse or a perk of being single. 😛

Anyway, for accountability purposes, here are my last 5 days of low carb meals. You can always find previous Low Carb Daily Journals too if you want to look back through more…

For breakfast I had my usual “pecans, cottage cheese & strawberries” bowl but this time I chopped up a Keto Blondie in it TOO which made for a nice change!

I was actually JUST going to eat the Keto Blondie – and figured I better add in some healthy foods with it too, lol. 😉 For lunch I made chicken sausage & cauliflower rice, which was a super quick one-skillet meal. It actually made 3 large servings so there was plenty for both lunch and dinner.

This is the chicken sausage I used: I fried it up in the skillet with a healthy serving of Pili Nuts, which are a very low carb nutrient dense nut with high fat content. And a nice buttery crunch. 🙂 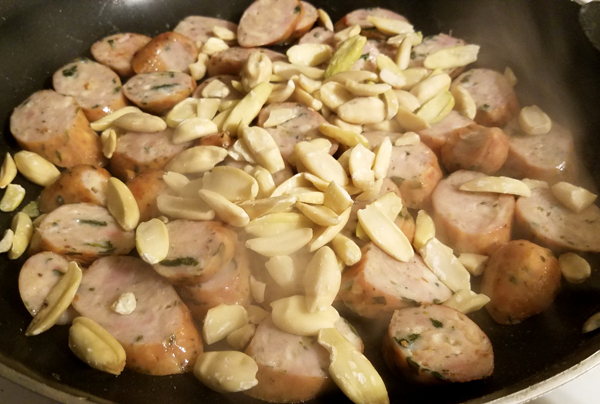 I microwaved the Cauliflower Rice and added that to the skillet and then had a big portion for both lunch and dinner: Later that night I got hungry again so I had a Keto Brownie topped with Peanut Butter Chocolate Chip Almond Butter – because that stuff is SO delicious and hard to resist. 😛 I also had a Tropical Margarita “fat pack” at some point in the day, plus my usual coffees…

I had more McDonald’s coupons for free McMuffins which I’ve been getting off the McCafe coffee lately. I drink a lot of coffee, so I saved up those freebie codes, lol. I cashed in 3 of them for breakfast – and asked for no cheese and no bread.

They forgot the “no cheese, please” on one of them, and their cheese is TWO carbs per slice! 😯 – but I just ate it anyway. 😛 That actually made two meals for me, then I had another Keto Brownie with Peanut Butter Chocolate Chip Almond Butter later in the day. 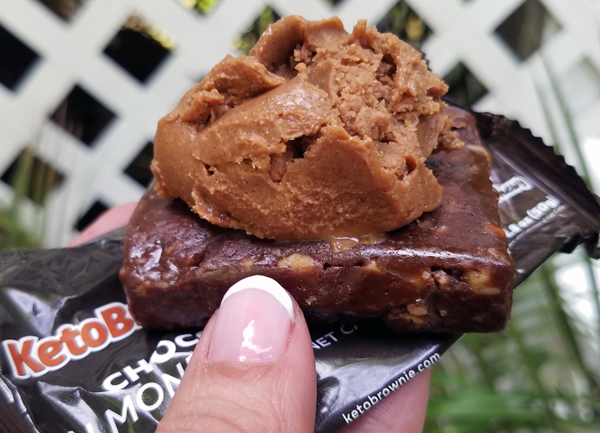 Then for dinner I had the last of the chicken sausage & cauli rice leftovers.

I started the day with 3 eggs scrambled in butter with colby jack cheese: 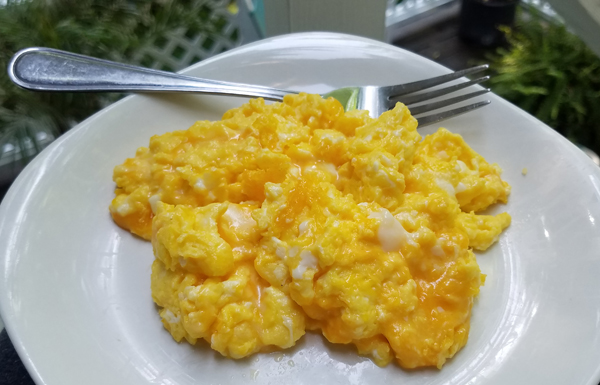 I had another Keto Brownie with nut butter (yes, AGAIN lol) plus a serving of pecans (30 grams) while I was getting through some tasks for the day.

Then I decided to bake another Egg Loaf that night so I would have something easy for meals the next few days. Mine always comes out shaped funny. 🙂 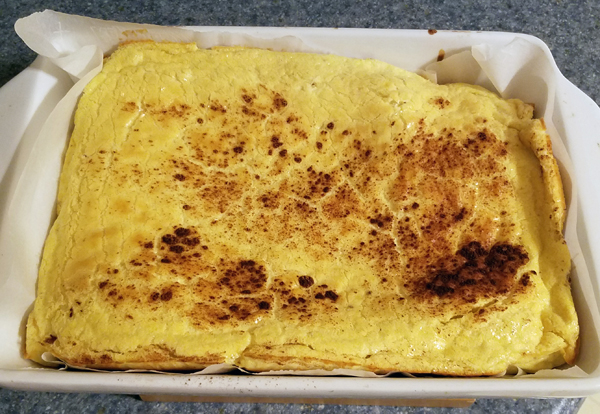 I had 2 servings of that for dinner – straight out of the oven. After it cooled of course.

Several people have mentioned theirs was more liquidy or something. Mine comes out done through and very firm: 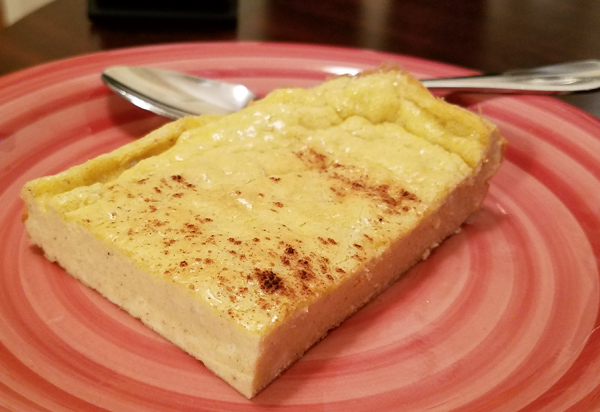 I got up and cut my egg loaf into halves and fried it up into Low Carb French Toast Sticks. I just fried it in butter and sprinkled a little Swerve sweetener on it, which was delicious! I ended up being on the road the rest of the day unexpectedly, for 11 hours actually, so I grabbed a Keto Brownie and just headed out. 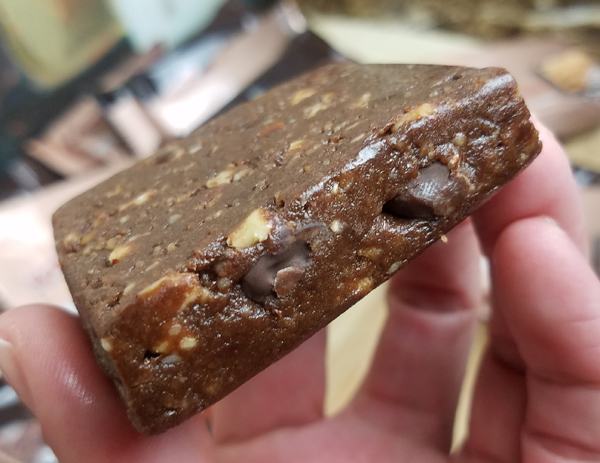 Later that night I stopped on the road at an IHOP and had a simple meal of 3 fried eggs topped with cheese and an order of bacon: I normally get fresh strawberries and avocado slices at IHOP but I was tired and just wanted something simple & fast that night. See:

🍓 Why I Love Eating Low Carb at IHOP

I did have 6 coffees w/sugar free powdered creamer (1 carb per coffee) that day too.

Tuesday morning I was back at my desk and had to jump straight into work, so I grabbed a keto bar from my stash. They don’t make these anymore unfortunately, but I still have a few left. 😉 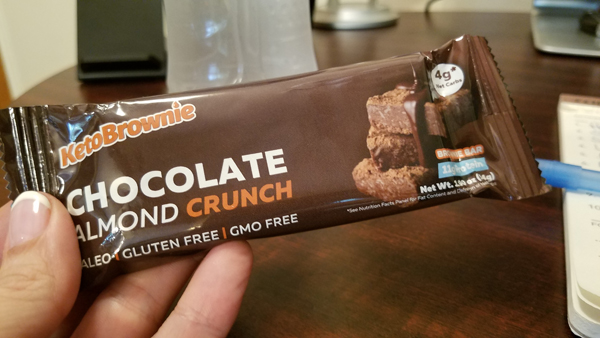 For lunch I fried the rest of my egg loaf into French Toast Sticks and this time drizzled them with the hot butter I fried them in plus sprinkled them with Swerve – which tasted very much like super fancy cinnamon toast. 🙂 That lunch ^ was VERY filling and ended up taking me two meals to finish, so later that night I just had a Keto Blondie and then a serving of pecans to snack on before I called it a night. At this point I’m realizing I haven’t had any veggies since my whole bag of cauliflower rice over the weekend, so I added fresh baby spinach to my usal breakfast of cheesy eggs. 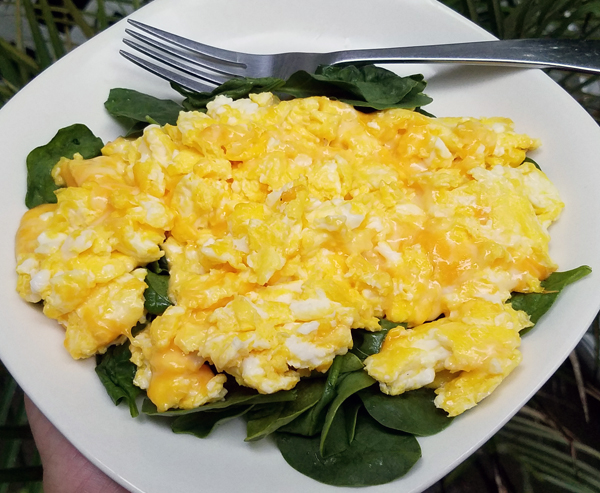 I had another one of the original Keto Brownie bars for a snack later, the bars they don’t make anymore.

Then that night I went to Applebee’s for dinner, and decided to order something different than my “usual” so I scanned the menu for ideas.

I was going to get their “garlicky green beans” but I looked them up and they were EIGHT net carbs (11 total) per serving. 😛

I settled on the grilled chicken with two sides: For my first side I ordered a side caesar salad with diced cucumber instead of croutons. That came out as a FULL plate of salad, not a small side-on-a-saucer, lol. I got full on the salad (I cleaned that plate!) plus a few bites of sauteed mushrooms off my date’s plate (he doesn’t eat mushrooms) and two of the wings he ordered.

So I boxed up my grilled chicken and broccoli and brought it home for lunch the next day. I asked them to “add bacon & cheese on my chicken, please” btw – which was delicious! 🙂 I ended up eating another bar too before I went to bed that night. Apparently the salad filled me up fast, but didn’t stick around for long!

Today I ate those delicious leftovers for lunch. 🙂 Did you weigh in this week? I posted the weigh in thread in our private Facebook Group, but you can weigh in here instead if you prefer.

p.s. The other day I hopped on Facebook and did a quick live video on Eating Fat to Burn Fat that I think you’ll enjoy:

I got us a 15% discount on the Keto Mojo Blood Glucose & Ketone Meter. The discount is coded into that link, so you’ll get 15% off on the site automatically.